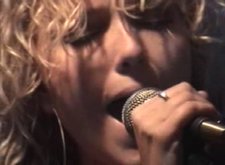 Before Char could sit down at the piano to write an EP, she had some thinking to do about the direction of her music. Starting at the young age of 6, singing along with country songs while travelling the world along side her parents, Char got a dose of diversity at a very young age. And following her High school graduation, Char took Applied Jazz studies at Mohawk College in Hamilton Ontario in 2001, opening her eyes and ears to many new and old styles of music while majoring in Vocal Jazz. After receiving honors and a diploma for her efforts, Char was looking for new concepts and ideas for her music career. She had heard from some fellow musicians from school how inspiring the West Coast was. Desperate for a new leaf to be turned, Char packed her bags and moved to Victoria BC. Char's new EP release "Blame it on the Moon" fully describes her as an artist and individual. Now, Char and her band The Broad Leaf Killers are in the studio recording their first CD together as a band and have evolved into what they were born to play...blues, rock, funk, and soul. Throughout the past months of performing live, Char has come into her own unique voice and with a solid, loyal band behind her there's no stopping her now.....so watch out!