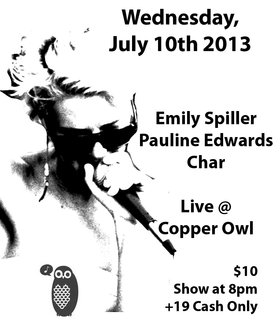 Emily Spiller is making a name for herself as an independent live looping solo artist. Winning "Female Vocalist of the Year" at the 2011 Vancouver Island Music Awards, she barely caught her breath from an Australian tour, and a showcase at Canadian Music Fest in Toronto. With three releases on her own label (Beacon Hill Records), songs licensed to films and an iPad app, as well as radio play on two continents - Em keeps herself busy!

She's a hint of Zap Mama & Feist-meets-Amy Winehouse. The room falls silent when Emily sings. Armed with a loop machine, laptop and microphones she creates live layers on stage. Blending elements of jazz, blues, and soulful vocal harmonies (and a little beat box thrown in the mix), she travels the globe as a one woman show, spreading a message of love.

Extensive touring of BC and Alberta included sharing the stage with violinist extremist Kytami, where she opened for DubFX and ZedsDead as well as jumping on the Rock Pit Stage at Shambhala in 2012. Other appearances include the Komasket Music Fest, The Big Time Out, Diversity Festival, The Kulth, Australian Blues Music Festival, and opening for Australian artists Kim Churchill, Ash Grunwald and OKA.

Emily Spiller has toured in Canada, China, Australia, & New Zealand. She was awarded a FACTOR grant for her EP "The Wonderbro Remixes" (2010), her third release. She is currently writing her next album, and will release a live recording in 2013.

Pauline's voice has been compared to the likes of Jann Arden, Bjork and Sinead O’Connor. With influences ranging from Bach to Radiohead, her music reveals a matured personal style that sings to the melody of the soul.

As a classically trained violinist, Pauline has had the opportunity to collaborate with some of Canada’s top artists, including recording and performances with GREENLAW (Formation Records Group) and LAL (Public Transit Recordings). She has been touring in Canada as a singer-songwriter since 2006, and was a regular member of touring folk-rock group The Caroline Spence Band from 2006-2009. She has also performed extensively with Folk-Noir musician James Kasper, owner of Blue Water Gun Records. In 2011, Pauline re-located to Taiwan, where she performed at music festivals and venues around the island. Before returning to Vancouver Island, Pauline had the chance to collaborate with award-winning director, Mao Wang Zi (http://www.youtube.com/shaolonbros) producing her second music video on the beaches of Taiwan.

Following the release of her debut album, Blame It On The Moon (2007), Birkbeck toured Canada on her own for the first time and began fleshing out her live sound by looping her vocals, guitar and keyboards in real time to add texture to her stripped down acoustic show. Intent on broadening her horizons as a performer and writer, and eager to experiment with a more aggressive sound, in 2011 Birkbeck formed Wolfheart with guitarist/bassist Aidan Logins and drummer, Alex Campbell. The following year, the three-piece released their own debut, Subtle Bodies, and began touring Canada regularly, performing at iconic venues like The Legendary Horseshoe Tavern and The Opera House in Toronto and at Canadian Music Week, JUNOFest and Victoria's own Rifflandia Festival.

Emily Spiller is a live looping artist. Nominated for five Vancouver Island Music awards in 2011, she won "Female Vocalist of the Year" shortly after returning from an Australian tour and a showcase at Canadian Music Fest in Toronto.      A hint of Imogen Heap-meets-Zap Mama with a splash of Feist, she blends jazz & blues with layered harmonie... more info

Pauline Edwards Singer-Songwriter and Violinist Pauline writes and sings from personal experience. A transcendental meditator since the age of nine, she has a genuine desire to inspire her listeners to explore their own life experiences, and to discover the potential for positive change through realization and acceptance. Her newest releas... more info
Audio: Jade, My Friend

"All I wanna do is share my music with the world, play for millions, and give people the power that music has given me." -Char At the ripe age of 6, singing along with greats such as Johnny Cash, George Jones, and Willie Nelson and travelling the world with her parents, Char(short for Charlene Birkbeck) got a dose of diversity at a very young a... more info
Submit info on this show to our admins