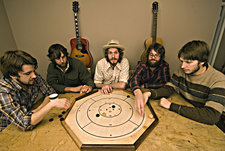 thedeepdarkwoods@gmail.com
Contact Info
Past Shows (22)
The timeless sound of the aptly named "The Deep Dark Woods" belongs to the depressing winters of the north. Pulsing with human warmth, these original songs echo through the lonesome night. Ryan Boldt's plainspoken lyrics offer a strong but gentle tone which understates poetry, oftentimes as startling as hot blood in fresh snow. Despite the dark themes, the heaviness never overwhelms the music's playfulness. An utterly fun rhythm section, brilliant guitar work, and eerily rich harmonies drive the songs. One could easily be forgiven for mistaking their songs as treasures of decades past, as The Deep Dark Woods approach their instruments with studied respect for the honoured traditions of the shadowy side of roots music.

The Deep Dark Woods' newest release "Winter Hours" is a collection of their best recordings yet. Working with Juno award winning producer/musician Steve Dawson at Vancouver's famed recording studio "The Factory", they managed to truly bring out an energy that the new songs deserved, recording the album live off the floor. What was created was an album full of raw emotion, sadness, beautiful vocals and harmonies, new sounds, and well thought out arrangements."Winter Hours" represents the ever changing sound of the band, and a step forward from their latest Black Hen release "Hang Me, oh Hang Me"(WCMA Nominated).

"I doubt it's an intentional act of class warfare, but with the release of their third full-length album, Winter Hours, Saskatoon, Saskatchewan, alt-country band Deep Dark Woods could hit cultural paydirt. Venn diagram the record collections of Deep Dark Woods and Pitchfork's 2008 album list topper Fleet Foxes and you'd round up a sizeable stack of Neil Young, Gram Parsons, and the Band LPs. But while Fleet Foxes have taken their influences and crafted them into pretty, abstract musical excursions and historical hymns to nature, Deep Dark Woods work the material, storytelling aspects of the tradition. Storytelling needs a narrator, preferably a reliable, sympathetic one that's easy on the ears, but it also needs a strong voice capable of venting horror, frustration, sadness, anger, outrage. And god knows we've got enough to be outraged about these days."
-Pitchfork

"This band is the best of its kind, masters of their genre, and well worth your time..."
-Berkeley Place

"...The music on Winter Hours is gentler, more complex and more reflective than its predecessor's jamboree folk...."
-CHARTattack

"This is a band worthy of real attention."
-Exclaim!

"...These twelve tales of frontier tragedy weave an alt-country pastiche of hanging trees and impending doom. When the Deep Dark Woods arent singing of sudden death, theyre crawling into some dark hollow looking for it...."
-Metro

"Robert Frost predicted correctly: the Woods are lovely, dark and deep. Especially on their new album, Winter Hours, which is the most enjoyable cold 'n' gloomy record to come out of -30C temperatures. Who thought depressing Prairie winters could lead to such a musical masterpiece?"
-Edmonton Journal

"...The Deep Dark Woods have delivered a record that will surprise critics and fans alike... This might be the best roots act in the country right now, and they've set the bar high for any that want to challenge for the title...."
-Herohill.com

"...it has a timeless sound. What I mean by that is that you cant listen to it and immediately identify what decade it comes from. Music like that has a tendency to have more staying power than those with flavor of the month stylings...."
-Ninebullets.net

“And the more you listen to the album as a whole, the more it starts to sound like a timeless, magical masterpiece. The arrangements are absolutely gorgeous – The DDW deftly blend acoustic guitars, pedal steel, some keys, and even toss in some banjo and strings for good measure. But what stands out most are the vocal harmonies. It is phenomenal.”
-HearYa
No audio samples have been linked to this profile.

Status: Unknown
- Last confirmed Nov. 26, 2011
Submit info on this band to our admins