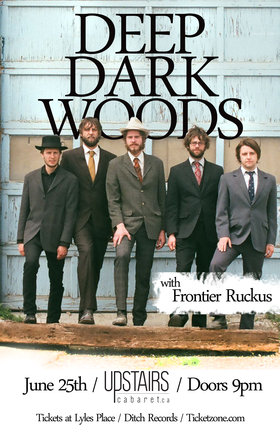 Chills climb spines when sound is given room to unfurl. The Deep Dark Woods’ unflinching pursuit of steadiness between decadence and minimalism is guided at every turn by their intuitive ability to balance grit, clarity, drive and restraint with a sure focus on experimentation.

Winter Hours (2009), caught critics’ ears across the country. The album, a solemn ode to darker themes of seclusion and detachment, could yet warm even the bottomless, frozen nights of hometown Saskatoon, SK. With Winter Hours, The Deep Dark Woods won Best Roots Group at the 2009 Western Canadian Music Awards, and Ensemble of the Year at the 2009 Canadian Folk Music Awards. The band also had the runaway winner in CBC’s Great Canadian Songquest with “Charlie’s (Is Coming Down)”, a song about Good Time Charlie’s in Regina.

Their new album, The Place I Left Behind, finds continuity in themes of temporal and geographic alienation, neglected inward trails, and the scars of abandoned intimacies. The album opens with a song about Saskatoon’s rougher edges. “West Side Street” is a study in contrasts – finespun vocals and a gently rolling melody cushion the gloomy story. “The Place I Left Behind” is loosely based on an old folk standard. Gorgeously morose, the title track confirms that The Deep Dark Woods capture lonesome yearning at its loveliest. “Sugar Mama” is a sweet and lively invitation to tap toes and shake off the blues; a seeming coming-of-age story is treated with playful banjo and an airy gait.

A rainstorm over the desert of modern music, The Place I Left Behind offers murder ballads alongside scrappy rockers, lovesick hymnals and slow-dance waltzes. The album illuminates folk traditions without stripping the shadows of roots music history - The Deep Dark Woods wake the ghosts of Appalachia with their prairie gothic pyre-side tales. The Place I Left Behind echoes with traces of time and space that are never fully abandoned or forgotten.

The timeless sound of the aptly named "The Deep Dark Woods" belongs to the depressing winters of the north. Pulsing with human warmth, these original songs echo through the lonesome night. Ryan Boldt's plainspoken lyrics offer a strong but gentle tone which understates poetry, oftentimes as startling as hot blood in fresh snow. Despite the dark the... more info
Submit info on this show to our admins