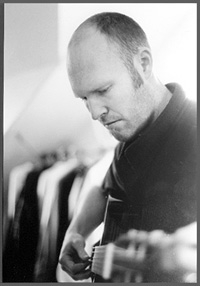 Chris Frye, lead singer and guitarist in two-time JUNO nominee The Bills, and rhythm guitar player for The Marc
Atkinson Trio, is proud to release his debut solo album, Raised On Rhythm And Rhyme. He is joined on the project by
an illustrious group of Canadian guest musicians, all of whom have helped Chris realize his vision for this collection of
thirteen new original songs. The name “Analog Ghosts” has been given to the backing band, which will remain a
dynamic and ever-changing entity, depending on what is called for by each performing environment.

As the primary lyricist for The Bills, and the driving rhythm player in the Trio, Chris has developed into a superior folk
poet and instrumentalist. The material on Raised On Rhythm And Rhyme sees him reaching new heights of eloquent
maturity in his songcraft. The songs are built upon Chris’ unique, West Coast lyrical imagery and stories, and are
grounded with sublimely laid-back, catchy melodies and grooves.

Listeners who know his work in the folk/roots world will recognize Chris’ choice of accompaniment on some of these
new songs: acoustic guitar, violin, upright bass. But there are other textures here as well. Cello, trumpet, saxophone,
tasteful percussion and drum kit, piano and Hammond B3 organ all appear, skillfully arranged by Chris and producer
Joby Baker (Alexis Puentes, Mae Moore, The Bills, Rachelle Van Zanten). The broad instrumentation brings the album
toward the work of Paul Simon or Van Morrison, all the while staying rooted in the folk world by virtue of the lyrics and
Chris’ versatile guitar stylings.

Perhaps most exciting are the three tracks that feature duets with some of Canada’s most renowned female singers.
Mae Moore, Oh Susanna (Suzie Ungerleider), and Ruth Moody and Nicky Mehta of the Wailin’ Jennys, each grace
songs that Chris wrote specifically to perform with these talented women.

Live performances of these new songs will occur in a variety of formats, with Chris playing solo or appearing with up
to seven other musicians accompanying him. He has developed engaging arrangements for a variety of band sizes,
and, with all of his experience as a charming and captivating storyteller and performer, audiences will be assured of a
pleasurable concert every time Chris takes the stage.
No audio samples have been linked to this profile.
No member roster has been entered (to link to musician profiles.)
Status: Unknown
- Last confirmed May. 24, 2009
Submit info on this band to our admins