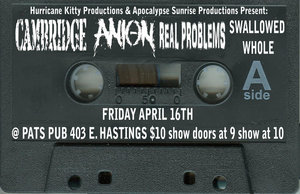 Find someone who thinks tapes aren’t cool and I’ll shove my Sony Walkman up his bum. Tapes are still rad and this Anion tape is no different. It’s red in colour and resembling the Teenage Mutant Ninja Turtles soundtrack cassette tape that I owned as a kid, but don’t worry, there is no ninja rap here. The first track, oops I mean song, (no tracks on a tape) starts out slow, sludgy and powerful with some angst-ridden screams. As it progresses to some feedback it leaves you wondering what is to come next. And what comes next is a killer riff, a pick up in the tempo and more bad-ass screams from Johnny Matter. Yes, the same Johnny from Assimilator and Chosen fame. Ireland didn’t suit him, (I heard he is deathly afraid of leprechauns) he’s back in Vancouver, coming full circle and getting back to his hardcore roots. And this is some riffy hardcore, almost a crossover of stoner metal and sludgy doom shit. The tape came in a rad cloth case that could be chopped into a cool patch. It also came with an insert that had some sick art. Not like how the kids say sick, but actually sick. Pictures of a body in a bathtub full of acid, a fetus and a fatty having a puke. All good stuff. 2 songs per side and there’s no separation between them, (other than some feedback) so when the tape clicks to an end you are left wanting more. But you’re gonna have to check out a show for that, and I heard the tapes were limited to only 100 copies made, so you better get down to their next show and get yourself one. If not for the rad tunes, the cool colour of the tape, or the cloth case, do it for the picture on the inside of fatty having a puke.