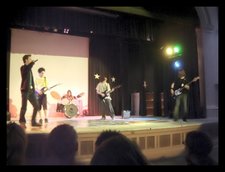 Wire In My Cereal

Get In Contact
treble.the.bassist@gmail.com
Contact Info
Past Shows (1)
"Wire In My Cereal is one of the greatest bands that most of the world will never know."

It’s all about walking lines, getting straight to the point, and of course the climax. This edgy alt-rock group formed out Victoria, BC in the spring of 2004 and has been rocking out non-stop ever since. With an ever-present police escort on their tails, and guitars, drumsticks, and mics in their hands, Wire In My Cereal is in it for the music.. and of course the party that inevitably follows.
No audio samples have been linked to this profile.

Status: Broken Up
It's time to face the music: WIMC is no more. We denied it for a long time, but the original group isn't coming back. Watch for other projects currently in the works by former members (see 'Conrad Come Home'). Peace. - Last confirmed Jul. 11, 2006
Submit info on this band to our admins