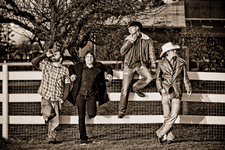 Darren Woods
darrenjewoods@gmail.com
Contact Info
Past Shows (4)
Wiley Fawks Band was started in 2008 in Victoria, BC. The four members are Shaun, Riley, Darren, and Ian. Together, we are Wiley Fawks. We are a group of guitar players and singers, and we play with a band of awesome musicians. We write the kind of music we grew up loving, carrying on the tradition of rock, R&B and country. The band decided to release the entire debut album for free online. Check it out!
No audio samples have been linked to this profile.

Status: Broken Up
- Last confirmed Jun. 1, 2012
Submit info on this band to our admins