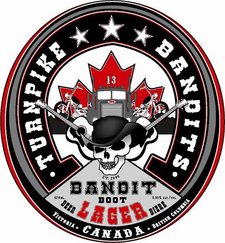 Eric Peterson
theturnpikebandits.tpb@gmail.com
Contact Info
Past Shows (21)
Nominated “Best Live Act” for the 2011 Vancouver Island Music Awards, The Turnpike Bandits deliver a performance not to be missed. From performing at big stage festivals to smaller acoustic performances, this 7 piece country/ rock band from Victoria BC is really making waves in the Canadian Country Music scene.

Started in 2006 as a 3 piece band, The Turnpike Bandits grew into a power house of musicians. The group is built with seven musicians whose talents are as diverse as the Canadian Country side, bringing only the best to the table. Eric Peterson (Singer/Song Writer/ Guitar), Matt Stockman (Drums/ Vocals), Al Sauborin (Lead Guitar), Luke Phillips (E. Rhythm Guitar), Shane Hunt (Bass), Ray Mohr (Pedal Steel) and April Reide (Back-up Vocals).

The band has performed at many great venues and events over the years. Some of the memorable performances they have had the opportunity to play at are:

Performed the Windows on the West Stage at the Calgary Stampede 2010, winner of the Special Recognition Award
One of the opening acts for Johnny Reid at the Duncan Sun Fest 2010
Opening act for the Blue Sky Festival 2010 for Tom Cochran-Colin James-Barney Bentall
Opened for Fred Eaglsmith at Element Bar in Victoria
Host of the 4 year running Bandit Benefit Chilli Supper and Concert for Victoria’s homeless and less fortunate at the Cool Aid Center
Playing for our Canadian Forces aboard HMCS Calgary for their annual “Cowboy Up” two years in a row 2009/10, and at the pacific Fleet Club 2009/10
Performed at the Vancouver Island Music Business Conference 09/10 at the Whistle stop pub
Eric Peterson and Shane Hunt performed 2 nights at Merritt Mountain Music Fest. On the Walk of stars Stage
Eric Peterson performed at a few of the 2009 CCMA’s networking events

Since the release of the bands first album “Good of the Bad/ Bad of the Good” in 2009 with songs like Truck Go Bang, You Can’t Slow Me Down, Queen Of Hearts - Queen Of Diamonds and other great songs… The Turnpike Bandits have been working on many other original songs such as Can’t See the Ground, Coal Train, This Love, Need You Around and much much more.

Between the rockin’ original compositions, The Turnpike Bandits keep the crowds ears tuned in to an amazing list of cover material to keep the toes tapping and boots stomping. From keeping to the roots of Country music performing songs from some of the greats like Waylon Jennings, George Jones, Johnny Cash, Merle Haggard and many other legendary musicians to some of today’s favourite songs from artists like Dierks Bentley, Brooks and Dunn, Travis Tritt and Paul Brandt.

As a band whose music holds true to the traditions of country music, with subtle undertones of rock and a fresh blend of electrified country rhythms… The Turnpike Bandits are steady rolling towards being one of most wanted acts in Canadian Country Music.
No audio samples have been linked to this profile.

Status: Unknown
Rockin country music with a twist... - Last confirmed May. 10, 2011
Submit info on this band to our admins