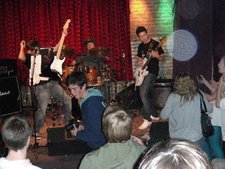 Mike Kenyon
thephoniclip@gmail.com
1-250-619-1350
Contact Info
Past Shows (1)
The Phonic Lip is a new band from Vancouver Island. After watching one of their sets you will see the huge variety the are capable of. One moment it will seem as if they are rocking out for one of the largest stadiums in the world and the next will feel like a quiet acoustic set for a group of friends. The band will be playing more shows this year across Vancouver Island. They are hoping to find a manager some time in 2010 after the release of a recorded live set.
No audio samples have been linked to this profile.

Status: Unknown
- Last confirmed Sep. 14, 2009
Submit info on this band to our admins