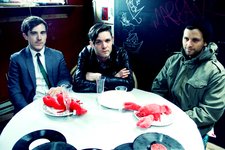 After having disbanded in 1994, several attempts were made to get the group back together, all of them unsuccessful. After secretly reuniting in 2007 and recording a new CD, the group released that new album and embarked on a concert tour in 2008. The album, entitled The Block was released on September 2, 2008. The group is preparing to have a tour with the Backstreet Boys.
No audio samples have been linked to this profile.

Status: Unknown
- Last confirmed Aug. 25, 2011
Submit info on this band to our admins