Middle-Aged Mope Pop from Victoria BC
(Visit Website)
Broken Up - Confirmed: Feb. 14, 2016 (Archived)
The Euphorians were borne out of the tour of David P. Smith's album Mantennae. They made a beautiful sound, burned brightly, and passed softly into the night. The Euphorians album features a seven piece band recorded live off the floor.
No audio samples have been linked to this profile. 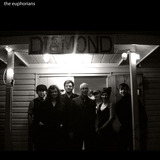 Status: Broken Up
- Last confirmed Feb. 14, 2016
Submit info on this band to our admins