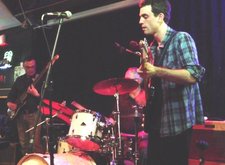 John Hunter
hunterjr@shaw.ca
2502981099
Contact Info
Past Shows (4)
The Deuces have been part of the Canadian blues scene since the 70's. The band released it's first CD "Slim & the Deuces - Live at the Blues Underground" in 2008. In 2012 Dave "Slim" Harris left the group and the exciting young guitarist/vocalist Jordie Edmonds joined the veteran rhythm section of John Hunter and George Fenn. In their original and non-mainstream cover tunes they have created a new edgier sound reminiscent of Northern Mississippi and Memphis "old school" blues. You can see them locally in Victoria at the Upper Deck, VBS functions and Haro Strait Music Society dances. Hope to see you at one soon.