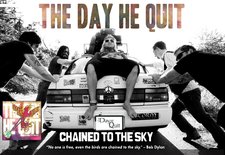 The Day He Quit

Jeremy Young
info@thedayhequit.com
250-739-3001
Contact Info
Past Shows (9)
Biding their time and doing it right, The Day He Quit has emerged from the rainy harbour city of Nanaimo, BC. You could call it the classic story of high school buddies starting a band in their parent’s basement. That is where The Day He Quit began as a twinkle in the eyes of Jason Henricksen, Jeremy Young and Brent Chauvin. But nothing significant materialized until a few years and beers later.

In 2007 the three friends recruited drummer Dave Wiebe and a temporary vocalist. Shortly after, they performed some of the songs they had written at a local Battle of the Bands hosted by Got Pop? Productions and The Cambie, Nanaimo. The competition had multiple rounds, lasted several months and marked the first live performances by The Day He Quit. They placed second and immediately gained fans in the local music scene.

The only thing the band was missing was a vocalist they really clicked with. Enter Shane Murphy. Armed with a new front man and new material, The Day He Quit entered the 2008 Battle of the Bands and was victorious. This success served to fuel their song-writing and they began preparations to put out an album – to be Chained To The Sky (released December, 2009).

Most recently The Day He Quit has played many shows in their local scene, sharing the stage with a variety of bands ranging from The Armchair Cynics to Ninja Spy. Competing with over 20 acts, they won another Got Pop? Productions Battle of the Bands, in late 2009, gaining some well-deserved cash, the opportunity to have a music video produced by SHAW TV, a photo shoot from EOT Productions, an opening spot for a high-profile band in a Got Pop? Show as well as inclusion on Got Pop’s Volume 4 compilation CD.

From early 2007 to now, The Day He Quit has made every effort to ensure their music is something to be proud of. Their growing cohort of fans will back that up.

The Day He Quit was Band of the Month on the Zone 91.3FM in June, 2010. The band also finished in the top 20 finalists for the Fox Vancouver Seeds 2010 Competition.

Chained To The Sky is available online through iTunes, www.cdbaby.com and in person at select record stores.

Status: Unknown
- Last confirmed Aug. 16, 2010
Submit info on this band to our admins