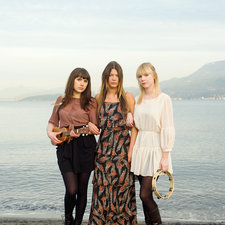 The Blue Violets is the debut self-titled album from a unique new voice on the Canadian musical landscape. At turns ethereal and nostalgic, the album is as emotionally honest as high school heartbreak, while demonstrating a power and depth of introspection that belies the age of its creators.

Despite their relative youth, The Blue Violets are no strangers to the music industry. Coral Osborne (vocals) and Kandle Osborne (guitars), who share writing duties on the record, grew up immersed in the world of modern popular music, having spent their teenage years soaking up the studio and touring life of their father's iconic band, 54*40. Bassist Louise Burns is a former member of Juno nominated band Lillix, and has been a fixture on the Vancouver music scene for the past few years.

This album is built around a collection of songs that tell the eternal story of a young person coming into her own, tempered by the rare cynicism of someone wise beyond her years. And it is this uniquely young maturity that beckons the audience back for repeated listens, ensuring that this collective voice will have a long arc if this debut work is any indication of the promise ahead.
No audio samples have been linked to this profile.

Status: Broken Up
- Last confirmed Nov. 10, 2018
Submit info on this band to our admins