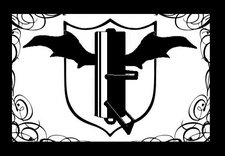 suck my rock!
No audio samples have been linked to this profile.

Status: Unknown
- Last confirmed Aug. 15, 2007
Submit info on this band to our admins