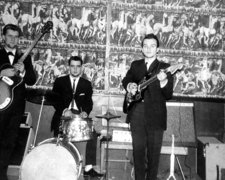 from Victoria BC
Broken Up - Confirmed: Mar. 18, 2010 (Archived)
That was a band we threw together called "The Answers" we were the first "outside" band to be booked into the Whitehorse club scene It was January 1963. This gave us enough dough to sneak into Juneau Alaska and play the 1008 club on Franklin St. We packed the joint so well that the bar across the street complained about our being Canadian and we were promptly deported back to Whitehorse. The bass player was Ronnie Hawkins old bass player `Dave Smith'. Great singer and bassist. I must say that in 1963 Lenny was probably at the height of his playing, at the time he really was phenomenal.
Terry Budd
No audio samples have been linked to this profile.

Status: Broken Up
- Last confirmed Mar. 18, 2010
Submit info on this band to our admins