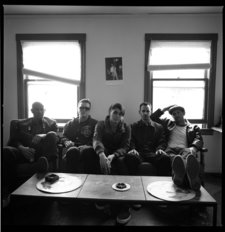 Man, these days everyone with a chipped tooth and a bad haircut says they’re street punk. It’s almost gotten to the point where it just seems like gimmickry, like being bi-polar or good looking. But once in a while, a dude who works in a warehouse gets together with a truck driver and makes shit kickin’ punk rock songs so ball-smashingly radical that they end up getting the guys from Me First and the Gimme Gimmes and One Man Army to help ‘em sing, and the end result is everybody’s favorite San Francisco institution that isn’t completely riddled with glory holes, the Swingin’ Utters. I know what you’re saying: what the fuck am I doing reading a Swingin’ Utters bio in 2011? Sure, they’re pretty much the trailblaizenist band that ever decided to put grandpa’s banjo and spittoon next to the marshall full stacks and the booze, but what have they done lately? Well, I’ll tell you, you impudent young whippersnapper. They’ve recorded Here, Under Protest, the single best album of their already award winning career (handsomest ballsack on a punk, 2001-02 [Darius]) and that’s saying something. It’s, as Ron Burgundy would attest, a pretty big deal.

It’s a big deal because the Utters have been kicking ass since even before 1995’s The Streets Of San Francisco, which was so good that it got them signed to Fat Wreck Chords (back when that was a hard thing to do [Heyo!]), got them the attention of pretty much everyone that listens to good, aggressive music, got them on the Warped Tour and even won them a Bay Area Music award or two. Now, I know what you’re thinking, and sure, awards shows can be a self congratulatory blow-a-thon, but when a bunch of vagabonds like the Utters stroll in drunk wearing Dickies and tee shirts and stagger out with some awards, to the chagrin of all the dipshits, well, that’s pretty cool, right? Of course. So what happened then?

Well, they put out a ton of great records, including A Juvenile Product of the Working Class, Five Lessons Learned, Dead Flowers, Bottles, Bluegrass, and Bones, an eponymous record, and a veritable shit-ton of EP’s and live stuff, toured relentlessly with such little-known bands as Rancid, NOFX, The Damned and Dropkick Murphys, sold over two hundred thousand records, annexed the golden voiced Spike Slawson of Me First and the Gimme Gimmes fame on bass and vocals, convinced Jack from Dead to Me and One Man Army to start playing guitar and singin’ too, and suddenly, on Here, Under Protest, the Utters have found themselves with this insanely stacked, Voltron-esque lineup, boasting a goddamned reckless cavalcade of vocal ability. That’s right, man. The Utters are bringin’ THREE FUCKING LEAD VOCALISTS to the table, and three vocalists that all could (and do) front amazing bands of their own. It’s like if Velvet Revolver was good or if the Backstreet Boys had stayed an oi band. Look, we’re getting off the subject. The point is, the Utters are back with their first full length in eight years, one that features Spike and Jack singing alongside Johnny and Darius for the first time in, uh…ever, and one that is going to kick the dicks of the Oi/Streetpunk scene like only a bunch of dudes with shitty jobs, axes to grind, beers to drink and a history of defining and putting out the best records of the genre can do.

Here, Under Protest is fourteen tracks of the Irish/Oi/streetpunk sound that you’ve come to expect from the Utters, and it’s also their best record. Look, all bios say that the musicianship is great and what you’ve become accustomed to is now being brought in bold new ways and then some, but this time, we’re talking about the Swingin’ Utters, and you already know how awesome they are, so let’s fuck the pretense, and close by saying that despite the smug, ‘eye on the exits’ title of Here, Under Protest, these dudes show no signs of slowing down after a staggering twenty-one years of doing it. So here’s a toast to the best new record by the best classic band in recent memory. In the words of my grandpa “To our wives and girlfriends! May they never meet!” Hey, whaddaya want? These are the Utters and it’s been eight years since their last record. Drink up! Don’t be such a dildo.
No audio samples have been linked to this profile.
No member roster has been entered (to link to musician profiles.)
Status: Unknown
- Last confirmed Jul. 9, 2012
Submit info on this band to our admins