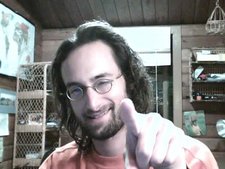 General. Simon and his mother Susan mover to Victoria, B.C when he was 3 years old.
Some of his earlier musical experiences that inspired his musical career, include a Micheal Jackson concert in Vancouver, and recording his first song a cover of “On the Road Again” at Expo 86. In high school he became a percussionist, while always working on songwriting, and comopsition. He won some legendary battles with other musicians, and had been known to freestyle lyrics up to 5 mininutes at a time. He jammed at this few times with other musicians, focusing more on covers then original material. After high school on a trip to the Middle East, he performed in numerous countries, always getting enthusiastic responses. Back in Canada, while attending the University of Victoria,

Simon joined his first band of note Donkey Sex Engine who perfromed at various venues at the University. He rmade numerous recordings during this time. From 05 to 08 Simon toured Vancouver Isalnd with the band Giddy House as a keyboardist and vocalist.
Now through the assistance of Producer Desmond Rodman Simon produced the Album Right On, featuring all original material. He is currently looking for mamanagement and production assistance for the release of his next few albums..Interested in only serious projects, at this time.
Available for songwiritng and collaboration. Have a good groove let me know about it.