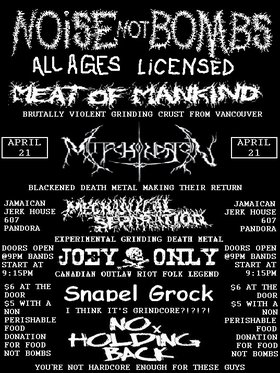 This is the final show for Mechanical Separation and Snapel Grock before Tisdale moves away. Come see off these amazing bands and show your suport for your scene.

Joey Only will also be playing a second show with a whole new line up on Saturday April 22 Earth Day including Guy Surley. More info about this show will be anounced soon. It will also be all ages and lisenced as well as at the Jerk House!

Anyone with merch to sell or zines, or any bands wanting to play contact me on my myspace for Noise Not Bombs.
For more info contact me at: http://www.myspace.com/satanicanarchyandpeace

Mechanical Separation began in 2003 as a three piece grind band from Saskatoon, Sk with Tizdale(drums), Stevil(guitar), and Chad(vox). Shortly after, Sarah joined the band on bass and Cody replaced Chad. In 2004, Mechanical Separtion accompanied Vancouver's Neckbeerd and locals, Suckcess, on their Coast to Coast with no cash tour across Canada. We ... more info

Georgia Straight 2005 There’s no shortage of hipster-approved hot spots on Main Street, so it says something about Joey Only that he chooses Duffin’s Donuts as a meeting place. When the Georgia Straight sits down with the ex–squeegee kid turned anti-folksinger, there’s not a white-belted scenester to be found. At the tables out front, 40... more info

After jesus was eaten by the pig, who he turned crazy, nothing was left for some small town boys who were so use to being raped in the mouth by catholic priests dogs. Until one day the knot of the dogs cock became stuck inside the little boys throat. And today god said we have Snapelgrock. more info
Submit info on this show to our admins