I bring da Funk from Victoria BC
Unknown

I bring da Funk from Victoria BC
Unknown

EMERGE is a charity fundraising event for the Mental Health Society of Greater Victoria and the Victoria Native Friendship Centre’s health team. 100% of the proceeds from the night will be donated to these two amazing local organizations.

Join us at Victoria Event Centre on Friday September 17th for EMERGE, a night of music, magic, wonder and spectacle. With performances by: Sail Cassady, Nick Mintenko, Aaron Wylder. Chaz Avery will be hosting the event, and Dj’s jeremiah brooklyn and Lucy Ford will be spinning beats from our new electronic compilation to close the night out!

Sail Cassady
Sail Cassady came alive while reading ‘on the road’ by Jack Kerouac in 2012. The adventure, art and imagery held within the parameters of a single book, birthed the idea that the same concept could be experienced within a song or a band. ‘All too often music can feel two dimensional and flat’ explains Colin Craveiro, singer/songwriter for the project. “I love imagery in music that almost pulls you in like a book or a film. Makes the experience of listening much more enriching and dynamic.”

Nick Mintenko
In March 2017 Nick released his first solo album “What I Thought I Knew”. The album received positive reviews from Grayowl Point and Ride The Tempo. The title track garnered the honours of being the #5 song of the week for the second week of January 2017 on Ride The Tempo’s charts. The album is said to resemble the sounds of Jeff Buckley, Ron Sexsmith, Radiohead, Deathcab for Cutie, and Patrick Watson among others.

Due to the long layoff from the global pandemic in 2020, Nick turned his efforts back to the studio and released an A-side B-side two song project called “So it Goes” in December of 2020. In July 2021 his first Live Ep ‘Phantom’ was released. This was recorded live off the floor at the Barnhouse Studio in Qualicum, BC. Look out too, for a new project on the horizon being recorded with Marc Atkinson on Hornby Island.

Aaron Wylder
Raised on the likes of Johnny Cash, Rolling Stones and the Beatles, Aaron Wylder writes and plays an eclectic blend of rock n’ roll music. It can be best characterized by crackly screeching amplifiers and old westerns movies. Motivated by the prospect of creating resonating songs, he spends most of his time with a guitar in hand.

“I try to write what I hear in my head and what I feel in my chest. It’s a damn cool thing to write a song that not only you love ,but speaks to others as well. If I’m able to make music that I enjoy and people enjoy it too then I’ll die a happy man.” – Aaron

EMERGE host, Chaz Avery!
Sometimes Carebear, sometimes Godfather, always charming: Drag King Chaz Avery has been making a name for himself in the #yyjdrag community since his debut in March of 2016 with his energetic live performances, and also by producing & hosting the well-loved King Fling extravaganzas and monthly Dinner & A Drag Show at The Mint.
@chaz.avery

jeremiah brooklyn
jeremiah brooklyn is a multi-genre producer, emcee, and Dj from Victoria, B.C. He released “Analog” on Surkeus Records in August of 2020 – an eclectic electronic album with tracks ranging from techno to dubstep – to variations on each form. His most recent EP, titled “WAVE” is also out now on all streaming apps. WAVE ranges from electronic to hip hop, and really showcases his diverse range of abilities as an artist.

Lucy Ford
Lucy Ford has been mixing breakbeats with a heavy focus on drum & bass since 2004.

Influenced by some of the UK greats in the 1990s as well as a love of intelligent hip-hop and other breakbeat-based genres, she started collecting vinyl during medical school and got her start as a DJ in the Toronto scene in the mid-2000s.

Lucy has held residencies with Toronto collectives Nocturnal Commissions and Embedded Entertainment, and since moving west is one of the founding members of Footwork Music Productions. She has expressed her craft on the airwaves while hosting Rinse Out Radio in Kingston, Ontario and more recently, Percussive Tendencies on University of Victoria’s CFUV 101.9FM. 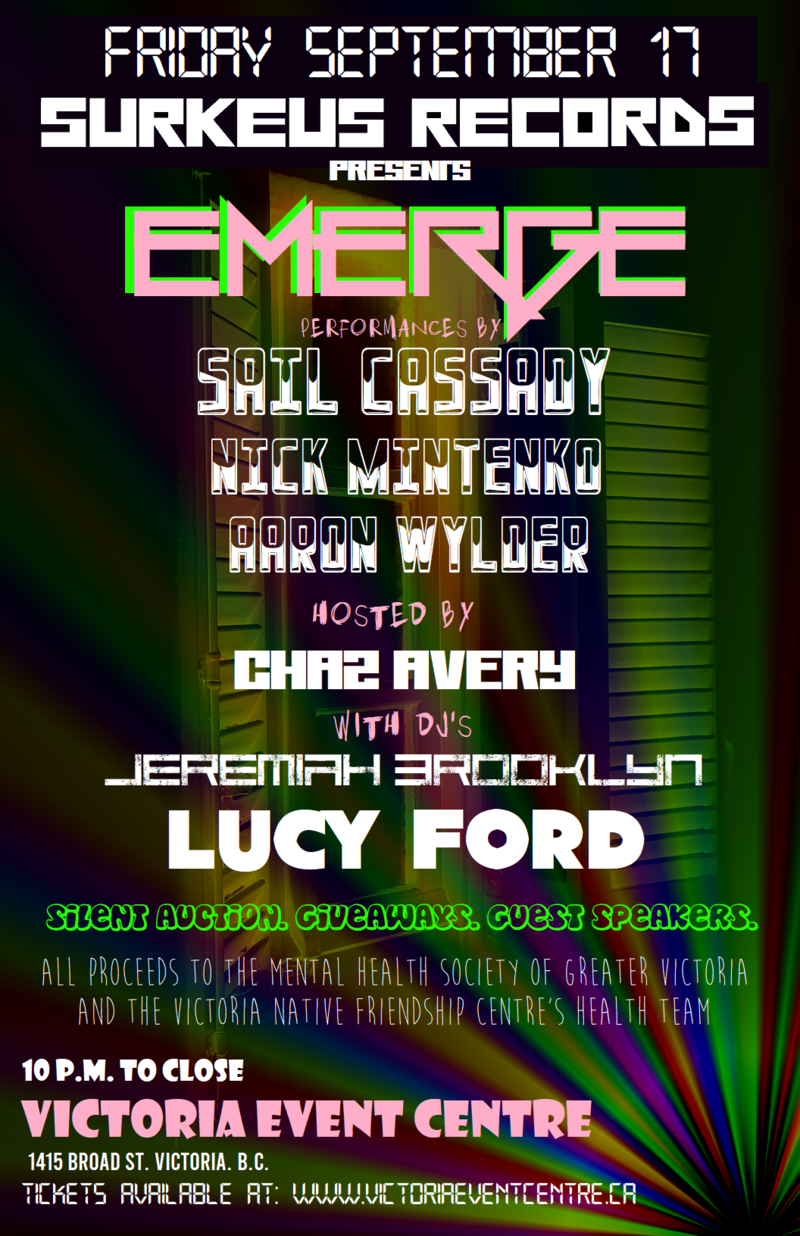