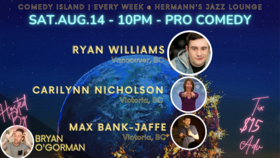 Ryan Williams
Former unimpressive Canadian collegiate athlete turned comedian, Ryan Williams is one of western Canada’s most exciting comics. His energetic performances, coupled with sharp material, make him a performer not to be missed. Ryan has appeared on CBC's The Debaters, at JFL42, JFL Northwest, was a finalist in SiriusXM's Canada's Top Comic and was featured on JFL Northwest's 'Best of the West' compilation album.

Carilynn Nicholson
Carilynn is a sharp tounged mother load of laughs! A favourite in the Canadian comedy circuit, her biting joke style and no nonsense attitude have made her one of the most sought after performers in the country. A true Canadian woman, glorious and free!

Max Bank-Jaffe
Max Bank-Jaffe has been a staple of the Victoria comedy scene for the past four years. Hailing from rural Ontario, this transplant uses his small town charm to explore his wry naiveté and confusion of himself and the world around him.
Max has made people all over Canada laugh, but not his mom. She wants him to be a doctor.