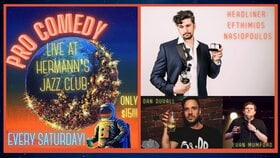 Theatre: Comedy
Headliner Efthimios Nasiopoulos
Efthimios is from Toronto, On. Growing up in a blue collar family and living in a multi-cultural city gave Efthimios his first influences as a comedian. His comedy gives us hysterical insight into human nature and tears down many social conventions we take for granted. While using his acerbic wit and charm, he is able to take audiences to places further than they had expected. Efthimios has performed at JFL Northwest, the Hubcap Comedy Festival, CBC's The Winnipeg Comedy Festival and CBC's LOL. You can hear him on Sirius XM where he's released his first album 'Efthimios', also available on iTunes.

Evan Mumford
Hailing from Nova Scotia, Evan Mumford is as much of a traditional stand-up as he is an improviser. He jokes in absurdities and has an eye for crowd work- sure to entertain the hip and the outcasted. Evan was formally the host of the science-fiction/improv podcast Must Be Nice and is now currently one of the hosts of the Bad Expectations podcast.

Dan Duvall
A great writer with a keen wit, Dan is one of BC's finest comedians! He is the host of 'The Hurt Locker' podcast on the Comedy Here Often Network and is the producer of 'The Pretty Good Comedy Festival' in Victoria, BC