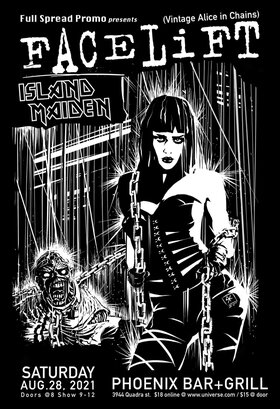 Music: Pop / Rock / Indie, Punk / Metal / Hardcore, Tribute / Cover
Local music shows are back @ THE PHOENIX BAR & GRILL. Join us as we flashback to a simpler time - when riots, bombings, and the president getting impeached for lying about a blow job - were our only worries. The world has always been messed up - at least now we can tune it out again with some killer music. Join vintage Alice in Chains Facelift and female-fronted Island Maiden rocking old school tunes from the before time. We are only releasing limited pre-sale tickets, get yours now so you don't miss out.

The early years of Alice in chains are known for the distinctive vocal style of Layne Staley with the harmonizing vocals and haunting riffs of Jerry Cantrell. This platinum-selling band dominated the (rock) soundtrack of the '90s and has proved the test of time. Facelift was formed in 2017 as a dedicated group of musicians showing their admirati... more info
Submit info on this show to our admins