Opening Acts:
Zane Oak
Zane is one of Canada's fastest rising new comedians and is the host and founder of Queer Dog comedy at the Viscious Poodle in Victoria BC.

Ty Lemmon
A hilariously lovable dude, Ty Lemmon has been called a 'genius' by SportsNet, 'brilliant' by TSN, 'legend' by Barstool Sports and 'annoying' by his ex wife and mother. One of the funniest in comedy!

Headliner:
Let's deal with the thing almost everyone wonders about right off the top: Yumi Nagashima's accent is indeed real.

For a while, the Tokyo born-and-raised comedian was told she needed to make herself sound more North American and less Japanese. This was before the 2019 release of her debut comedy album, My Name Is Yumi, and before her standup career took her places she’d never dreamed of: Vancouver, New York, Los Angeles, Jakarta, London and, um, Regina.

To appreciate how things have taken off for her, it helps to back up a bit.

After moving from Japan to Vancouver on Canada’s West Coast, and then teaching Japanese to English-speaking locals, Nagashima took some acting classes. That was when she first learned of a small stumbling block to stardom: her unmistakable Japanese accent when she speaks English.

Cue the endless auditions for not-exactly-coveted movie and TV roles as Japanese scientist and Japanese waitress. When it was suggested that she should see a dialect coach, Nagashima thought about it for a second or two, and then declined.

Her reasoning was simple. To speak perfect English would make it seem like she was trying to hide something she's proud of: being Japanese. Still, she's happy that North America is now home, mostly because moving across the Pacific gave her the chance to reinvent herself. She was exposed to standup after she moved to Vancouver. While on a date, Nagashima found herself at a local comedy club. Laughing herself silly, she went home convinced she might have something to say onstage.

After spending a couple of weeks writing and tweaking jokes, Nagashima made her standup debut in October of 2016. And suddenly she knew what she’d been born to do.

As her standup career has blossomed, Nagashima is the first to admit her life has become charmed. When you love travelling, few things are better than boarding a plane, with getting paid to make people laugh an
added bonus. Nagashima has done plenty of that in 2019, taking her act around the globe, thanks to invitations from Montreal’s Just for Laughs showcase, the Jakarta International Comedy Festival, and Comedy Central Asia in Singapore.

And she’s got ambitions beyond owning stages across the world. Those include landing her own sitcom, branching out into film, and creating shorts for her YouTube channel, which has 167,000 subscribers and
counting.

“I also want to have my own talk show, like Ellen DeGeneres or Oprah Winfrey,” she says. “Except it will be called The Yumi Nagashima Show.” 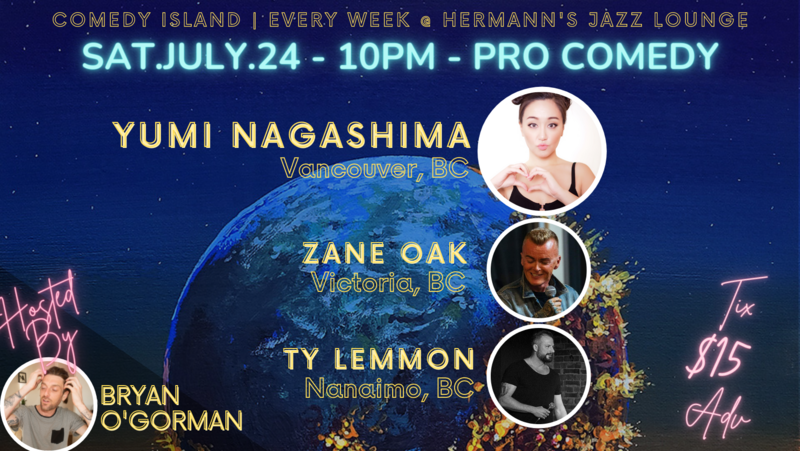