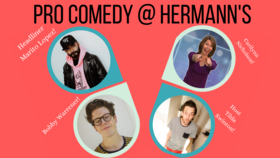 Music: Tribute / Cover
Feature act: Carilynn Nicholson
Carilynn is a sharp tounged mother load of laughs! A favorite in the Canadian comedy circuit, her biting joke style and no nonsense attitude have made her one of the most sought after performers in the country. A true Canadian woman, glorious and free!

Feature act: Bobby Warrener
Bobby Warrener is a stand up comedian residing in Vancouver, British Columbia. Since entering the comedy scene in 2016 he has had the opportunity to perform at the Winnipeg Comedy Festival, JFL Northwest, and tour across the country with Yuk Yuk’s. With his rapid fire joke style and laid back demeanour he has quickly become a favourite with audiences all across the nation.

Host: Bryan O'Gorman
Known in comedy circuits around the globe for his finely tuned writing style and catalog of character voices, Bryan is seven foot five and thirty two pounds of pure lanky hilarity. His debut album hit #1 on itunes Canada's comedy charts and has been featured in The Melbourne Comedy Festival, Just for Laughs, JFL42, Sirius-XM radio, MTV, NBC, The Comedy Network and more! A comic that celebrates all elements of stand up comedy (writing, voice, physicality and plotting against the elite), Bryan's show is full of guaranteed laughs in a world full of guaranteed jerks