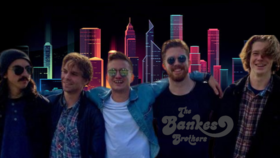 Music: Funk / R&B, Jazz / Blues
Fronted by brothers Morgan and Nelson Bankes, The Bankes Brothers have been making music together since their debut in 2015. The band really came together however, when their powerful vocals were eventually accompanied by the talented Carson Cleaver on lead guitar, Ross Haskett on bass guitar, and Gray Oxley on drums. They all come from an array of musical backgrounds and tastes - rock/jazz/folk/blues - which is reflected in the wide variety of material they cover, as well as in the sound of their original tunes.