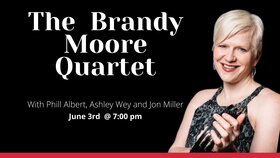 Music: Funk / R&B, Jazz / Blues, Tribute / Cover
Brandy Moore, originally from the Okanagan Valley, moved to the west coast at age 17, studied music at Capilano College, and spent the next 10 years performing around Greater Vancouver before releasing her first self-titled independent CD in 1999. In 2001, she relocated to Regina, Saskatchewan and went on to release an additional four independent CDs over the next decade.
The singer-songwriter and song interpreter has appeared all over western Canada, the southwestern United States, New York City, Mexico, Central America, and Portugal. Her CD "Real Good Love" was recorded in Nashville with several seasoned session/touring musicians, including Bonnie Raitt’s long-time guitarist George Marinelli.

Visit brandymoore.ca for a taste of the music.

Accompanying Brandy and Ashley will be a superlative rhythm section comprised of Jon Miller, drums and Phill Albert, bass.