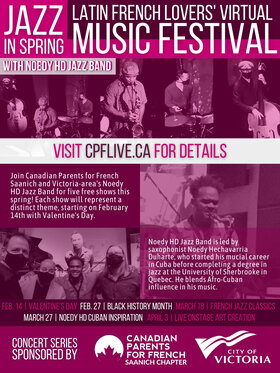 Music: Jazz / Blues
CPF Saanich jumped at the chance to work with local artists to offer an innovative way to offer their members, and the community at large, a creative way to hear French. Also, it would provide an opportunity to watch a piece of art be created in the moment, as well as an opportunity to hear some French jazz songs. Noedy HD Jazz Band is led by Cuban tenor saxophonist Noedy Hechavarria Duharte. The group offers innovative jazz and a solid, breathless performance by talented co-musicians.

All musicians reside in the Victoria region and performances will be conducted in local studios, providing much-needed work to people in the arts. The event will feature three musicians, one singer and one artist, invited guest musicians as well as studio recording engineers and website/social media support. The concerts will be video recorded by a team of technicians affiliated to local radio in Victoria.

All virtual concerts will be FREE to anyone interested to watch these performances, accessible at http://www.CPFLive.ca, on the day of their release.

The Noedy HD Jazz Band is composed of three excellent and renowned musicians who work and live in Victoria and who are active on the local and international music scenes.

Saxophonist Noedy Hechavarria Duharte began his music studies and career in Cuba and completed a BA in Jazz Performance at the School of Music in Sherbrooke, Quebec. Noedy played at various music events including the Festival de Jazz de Montréal. Hechavarria Duharte is currently working on an original album which blends contemporary jazz influences and his Afro-Cuban background.

Bassist Phil Albert is a composer, performer, bandleader, researcher and educator. Phil has released nine records as a leader and co-leader, played on hundreds of recordings (including JUNO-award winners), and has performed over a thousand shows across North America and in Europe.

Drummer Damian Graham performed all across Canada, the U.S. and Europe. He has been busy changing the way people think about the drums. Damian’s musical diversity has led to performances with some of the finest musicians in the country and abroad. Damian maintains a busy live and studio schedule with his own ensemble and as an in-demand freelance musician.

If you miss the show, the recording will remain online via CPFlive.ca YouTube channel