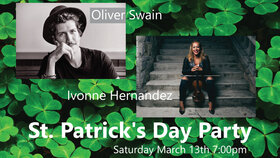 OLIVER SWAIN got his start performing and writing with many of the US and Canada's most loved roots bands including The Bills, The Duhks, Outlaw Social and The Red Stick Ramblers. A busy composer, Oliver has composed the score for two sold out shows at the McPherson Playhouse since 2016 and one of his scores for The Little Prince ran at the Chemainus Theatre Festival in 2018. Oliver's recent performance highlights include including Folk Alliance International(twice official), Winnipeg Folk Festival, Calgary Folk Music Festival, Vancouver Folk Festival, The Harrison Festival of the Arts, North Country Fair and Mission Folk Fest.

Some people are born to play music. By the age of three, IVONNE HERNANDEZ started playing violin by ear, everything from her mother’s favourite Maritime reels to her father’s Chilean folk music roots. A child prodigy, she soon was playing guitar, piano, cello, flute, and percussion before joining Daniel Lapp’s BC Fiddle Orchestra. While still in her pre-teens, Ivonne played on the Orchestra’s Fiddleharmonic CD and before 60,000 at a Commonwealth Games performance with the Crash Test Dummies. Ivonne Hernandez has mastered Canada’s traditional fiddle music. She embodies the country’s 21st century multiculturalism, and her music reflects the new century’s marriage of cultural influences. The young fiddler transforms her folk music roots into an exciting and dynamic new form!