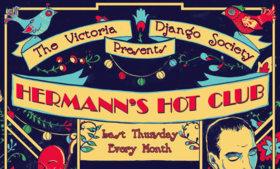 Music: Country / Bluegrass / Rockabilly, Folk / Celtic / Latin / World, Jazz / Blues, Tribute / Cover
Award winning roots artist Oliver Swain has been a celebrated musician for years, held in high regard in acoustic and folk music styles for both his astonishing instrumental and vocal abilities, though he seldom gives the genres a fully traditional treatment. Oliver Swain strays towards the whimsical, the spiritual, and the socially conscious side of what he likes to refer to as "chamber folk odyssey". It's these beguiling and provocative elements that make him unique as an artist and songwriter. Devon Leger even called him "The Zen Rock Garden of old time music" No Depression

"This is genre defying at it's best...beautifully played and performed, each song a mini masterpiece" Paul Jackson, Fatea magazine UK

"Since I first discovered him, Oliver Swain has been one of my very Favorite artists, especially in a live setting" Tamara Kater, Director at Folk Music Canada