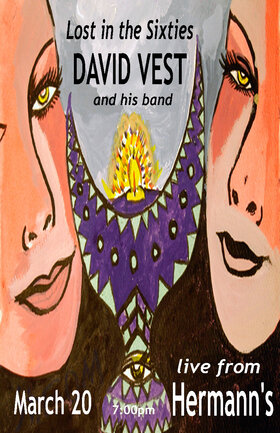 Event Archive - Lost in the Sixties: David Vest and his Band:

Music: Funk / R&B, Jazz / Blues, Tribute / Cover
Maple Blues Award winner David Vest and his band venture into the psychedelic (and romantic) mists of the Sixties (a decade Vest has rarely visited since living through it). Some of the selections will doubtless bring back memories for many, but other tunes, not so well-known (or overplayed) might make you wonder why they aren't performed more often. Expect to hear works by Lou Reed, the Moody Blues, the Doors, Donovan, Joan Baez, Jimmie Rodgers (the other guy, not the singing brakeman), Marvin Gaye, Ray Charles, the Byrds, etc. There might also be a song or two from an unreleased album Vest recorded in Birmingham in 1965-66, only to have the project vanish when the producer was arrested for murder.

The band features Tom Bowler on guitar, Damian Graham on drums, and Ryan Tandy on bass.