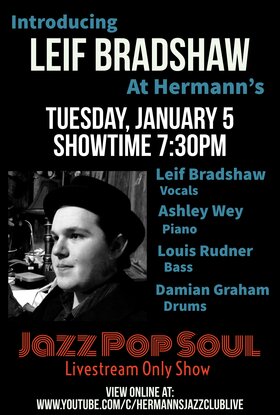 Music: Jazz / Blues, Tribute / Cover
Leif Bradshaw has already made quite a name for himself. He plays five instruments: piano, trumpet, viola, cello and percussion; has carved out an acting niche and has already completed a number of professional composing projects. But what he is really known for is his voice. A cross between Gregory Porter and Kurt Elling! A show not to be missed!

Growing up obsessively consuming music of nearly every genre, and participating in several musical projects in and out of school, Leif Bradshaw was particularly fond of jazz, possibly thanks to his parents choosing Vince Guaraldi instead of Mozart as default lullaby music for their newborn son. This fondness made him quick to seek out Hermann's Jazz Club, upon learning during his college classes about the jam sessions hosted there. Ever since, he would often make a point to drop in to sing, and try to make friends with those in Victoria's jazz scene. Now, after over half a decade of becoming a familiar face to Hermann's, whether as a regular patron, jam session participant, or guest singer with some fabulous local jazz headliners, Leif Bradshaw finally is about to be his own headliner for a show at Hermann's. If you have an evening to spare on January 5th, 2021, tune in to the club's livestream feed, where Leif shall perform a handful of some of his favourite songs suitable for a jazz club, in what will be the start of a good run of shows to come. While this debut as the face of a Hermann's show sadly won't allow an in-person audience, this is nonetheless an exciting opportunity for Leif to advertise what to expect in future performances, when in-person audiences can happen again. In the meantime, sit back, relax, and prepare for a livestreamed jazzy welcome to the first full week of the New Year with Leif Bradshaw, along with the talents of Ashley Wey on piano, and Louis Rudner on bass.