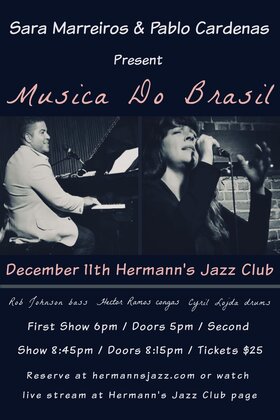 Music: Folk / Celtic / Latin / World, Jazz / Blues, Tribute / Cover
Cuban pianist Pablo Cardenas is back at Hermann’s Jazz Club with special guest Canadian-Portuguese singer songwriter Sara Marreiros to perform music from Brazilian composers. Sara is a world class artist, with an incredible musicality and unique style, and the embodiment of a musical nomad.  She grew up travelling through Europe and North America and these experiences greatly influenced her musical evolution. Sara has been a solo performer as well as collaborated with musicians from all over the world, performing diverse genres including Jazz, Fado, hip-hop, world beat, electronica and folk. She has also been deeply committed to vocal improvisation and sound healing. Since 2000 Fado music has played a star role in her performances and has offered her the opportunity to embrace her Portuguese heritage. She recently played the role of Amalia Rodrigues in Puente Theatre’s production of “Fado, The Saddest Music in the World “written by Elaine Avila. Currently Sara performs in a variety of ensembles in Victoria and Vancouver B.C.

Pablo Cardenas is a Cuban Jazz pianist,  composer, music educator and arranger based in BC, Canada, with different influences like Afro-Cuban, Latin jazz, Jazz Fusion, Modern Jazz, Classical and more. He studied classical performance at the Superior Institute of Arts in Havana, Cuba. He has been residing in Canada since 2011 where he has created different music projects and is contributing for the developing of the Latin music scene in the area, performing at the most important events and collaborating with many accomplished musicians.

The connection created by the collaboration between Sara and Pablo is rare and special, making this event a unique opportunity to see this two artists collaborating again. On the line up the amazing Rob Johnson on bass, Hector Ramos on the congas and Cyril Lojda on drums. As this is a double night make sure to select the most suitable time when purchasing tickets. This event will also be streamed live from Hermann's Jazz Club page. Your contributions will be appreciated.