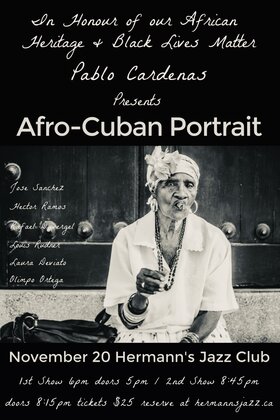 Music: Jazz / Blues
The history of Afro-Cuban folklore is full of incredible music with a high influence from many African regions, an endless universe of percussive melodies, melodic rhythms and unique dances. This became a big part of what it is today Cuban culture. “Afro-Cuban Portrait” is a tribute to Cuba and Africa, and a way to express our intention to support the continuation of the fight for the end of discrimination of blacks and indigenous population in Canada, North America, Caribbean, Central and South America, and everywhere, along with the end of all type of discrimination to all vulnerable population groups in the planet, we believe that fighting for the rights of blacks and indigenous population means fighting for everyone’s rights.