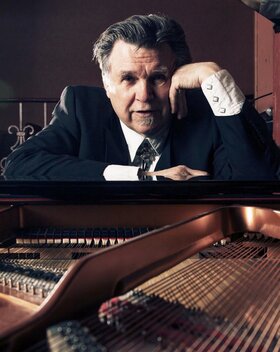 Music: Jazz / Blues
Celebrating his 77th birthday, David Vest will definitely be radiatin’ all 88 keys of the piano, with expert help from his band. Expect an upbeat selection of Vest’s most popular songs, as Victoria’s 5-time winner of the Maple Blues Award for piano player of the year marks another milestone.

As the late John Valentyn wrote, “Vest’s bio reads like the history of rock ‘n roll and blues.” What other songwriter has had his songs recorded by Tammy Wynette and Downchild? He sits down at the piano and suddenly you’re in a Gulf Coast juke joint in the golden age, but it’s happening right here and now.

Vest played his first professional gig in 1957, in his native Alabama, and they still haven’t found anybody who rocks harder than him when the spirit moves. Yet he can turn around and play the music of Dave Brubeck and Thelonious Monk, as he did this very summer at Hermann’s. Whatever music he plays, he seems to find the hidden depth charges in it. When he plays the blues — his first love — the authenticity is unmistakable. As Katie Webster said when he heard him for the first time, “I knows it when I hears it.”