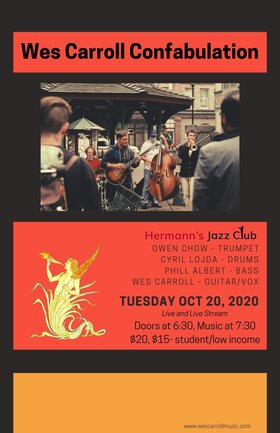 Music: Funk / R&B, Hip Hop / Rap, Jazz / Blues
The Wes Carroll Confabulation walks the tight-rope, balancing detailed arrangements with the power of spontaneity. Since early 2015, they have honed their unique blend: stretching out into a world of hip-hop grooves, soul and electricity while not losing their jazz footing. In that time they have most notably performed at four Victoria Jazz Festivals. In the summer of 2018, they released their debut album “Off Empire” which peaked at #4 in !EarShot’s jazz category for national campus and community radio plays. Their set blends singer-songwriter and instrumental with themes that include social justice, surveillance, mental health, climate change and of course, love songs too. Wes honed his craft at Vancouver Island University’s jazz studies program (2014) and is currently doing a masters in jazz performance at the University of Toronto. The Confab is currently promoting their newly released second album “Elephant in the Sea”. http://www.wescarrollmusic.com/confab