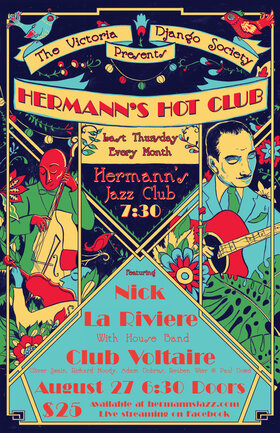 For the August edition, Club Voltaire is joined by Victoria favourite Nick La Riviere(nicklariviere.com) an accomplished trombonist who has toured internationally with bands such as the Juno award winning Paperboys, Michael Kaeshammer, 54-40, and Adonis Puentes. He's been a special guest with such bands as Steven Page (Barenaked Ladies), The Temptations, and Nikki Yanofsky.
"The extraordinarily talented trombonist, Nick La Riviere, is a true showman. His enthusiasm and energy totally engaged the audience and it was obvious that he loved every minute of what he was doing on stage."
Sheila Midgley, Galiano Concert Society

Reuben Wier is a multi-faceted musician based in Victoria, B.C. He compliments his fiery yet unpretentious guitar playing with husky-smooth as honey vocals. With influences ranging from swing to soul, gospel to manouche, blues to jazz; he has captivated audiences around the world. Reuben is known for his complex but accessible improvisations, drivi... more info
Submit info on this show to our admins