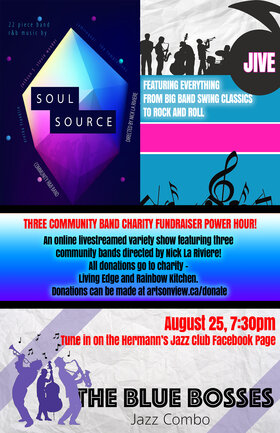 Music: Jazz / Blues
Three community bands directed by trombonist Nick La Riviere come together for a new kind of livestreaming event. Nick and other members of his community groups will host, as the bands take you through what they’ve been up to since the pandemic began. There will be a showcase of ‘virtual band’ performances by each group, chat with the band members about life in the ’new normal’, maybe some comedy, and more! It’s bound to be an entertaining show, so make sure to tune in on the Hermann’s Facebook page!

The bands normally support the Living Edge and Rainbow Kitchen charities with their end-of-season live performances at Hermann’s, so this will be a fundraiser show for those organizations. Every donation made will be split evenly between the two. Donations can be made at artsonview.ca/donate.