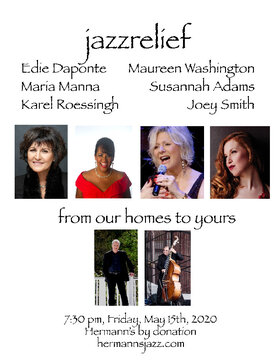 Music: Jazz / Blues
Victoria's pre-eminent jazz singers Edie Daponte (coming to you from Sidney), Maureen Washington (Broadmead), Maria Manna (Bear Mountain), and Susannah Adams (James Bay) perform from their homes using groundbreaking new technology in a precedent-setting concert at Hermann's online. The evening will be hosted by Karel Roessingh
(Highlands) on piano, with the inimitable Joey Smith (Gordon Head) on bass. Partial proceeds will go to the Victoria Foundation's RapidRelief Fund and to Hermann's. Gather around the computer to witness this historic event!

Vocalist Susannah Adams is widely recognised as a dynamic and versatile musician who is consistent in developing her capacity within the jazz genre. Adams has worked with some of Canada’s finest musicians, including Miles Black, Oliver Gannon, Daniel Lapp, Joby Baker, David Restivo and Phil Dwyer. Adams is fast becoming one of Vancouver Island... more info
Videos: