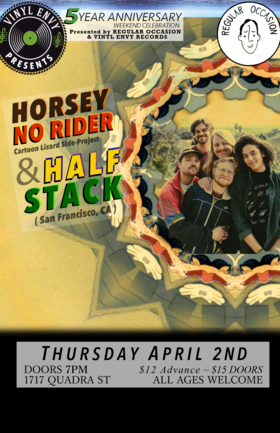 Vinyl Envy celebrates their half-decade anniversary! This record store is an all-ages accessible venue that has hosted hundreds of shows since its opening in 2015.

Regular Occasion is collaborating with Vinyl Envy to bring you a night of alt country music featuring:

Horsey No Rider | country classics and originals | Victoria, BC
Members of Cartoon Lizard + pals, all saddled up for the jamboree.

Formed in 2017 and featuring members of Babewatch and Jay Som, Half Stack is a joyful expression of country rock without the machismo.

This event takes place on unceeded Coast Salish territory, specifically on the land of Lkwungen and W̱SÁNEĆ-speaking peoples. As a settler-run organization, Regular Occasion aims to foster a safe space of decolonization and solidarity with Indigenous peoples.

ACCESSIBILITY | Vinyl Envy is a wheelchair accessible all-ages venue with a multi-gender washroom.