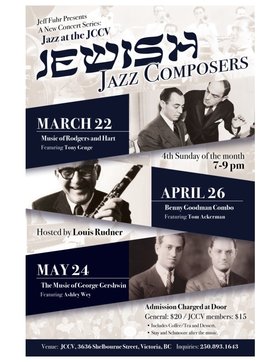 An all star band bringing the music to life will include: Tony Genge on Piano, the series host, Louis Rudner on bass, and a new addition to the Vancouver scene, Nicholas Bracewell on drums. There will be two sets of music from 7-9pm as well as some stories of the famous duo. Light refreshments (Tea and Coffee and something sweet to nibble on) will be available.

This new series will present one show a month for March, April, and May, then resume in the September with a new roster.

Louis Rudner has recently relocated to Victoria, BC from Michigan. He is a full time bassist in the Victoria and Vancouver Island Music scene with several diverse projects as well as call-up work. He balances the worlds of performing on Upright bass and Electric bass, as well as Private instruction and group jazz workshops. more info
Submit info on this show to our admins