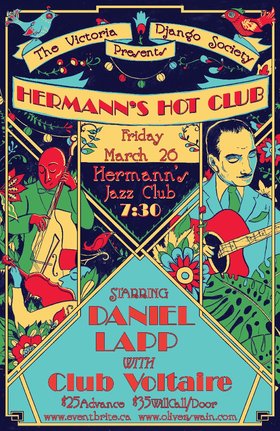 Music: Jazz / Blues
**If you have purchased tickets for this show, you will be contacted shortly directly.**

Featuring Daniel Lapp with Club Voltaire!
World renowned Violin and Trumpet player Daniel Lapp has made his mark on Victoria as an educator, producer and vocalist but those who know him best love his free spirited improvisation and incredible skills as an instrumentalist.
Joined by The Hermann's Hot Club House Band - Club Voltaire featuring Oliver Swain, Richard Moody, Reuben Weir and Paul Dowd who perform an opening set then are joined by Daniel Lapp.