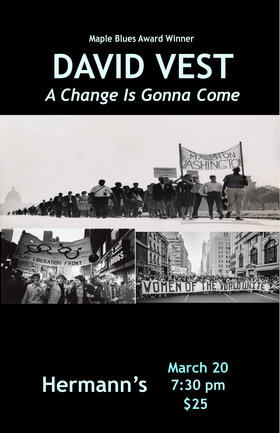 Music: Jazz / Blues
Once upon a time, the answer wasn’t just blowin’ in the wind — it was playing on the radio. David and his band revisit the Blues, R&B, Soul and Gospel music that played such an important role in an era of social change. You’ll hear songs by Sam Cooke, the Staple Singers, and other artists who were prominent in the freedom movement.

David Vest could probably play any style of music he wanted to perform. The songs he and his band will play in this show go a long way toward explaining why he has chosen to play the blues.

David is a five-time Maple Blues Award winner. He travels across Canada bringing what John Led Hooker called “the message of the blues.” He and his band have appeared as headliners at numerous major music festivals.