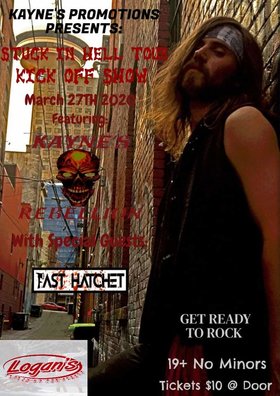 Music: Pop / Rock / Indie, Punk / Metal / Hardcore
This is the inaugural show through Sebastian Kayne's revamped promotion label called Kayne's Promotions! What better way to start off the journey with some of Victoria's best up and coming rock n roll acts TODAY! Kayne's Rebellion (Sebastian's Solo Project) is setting sail for Alberta to promote the much anticipated Debut Album called "9 Months of Hell" due to be released by late February/early March! Sebastian Kayne is a true rock n roll treat to watch live as his passion and true heart put behind each and every performance is made to let the audience feel like they play a big part in every show! With some of the best professional, seasoned musicians he knows sharing the stage with him, this is a performance you will NOT want to miss.
If that isn't enough, opening up for them is an act called Fast Hatchet! This band has everything you could ask for in a live performance! Young into their career, you would never guess they are brand new onto the scene! With a vocalist with a very dynamic raspy tone, complimented with his guitar work worthy of a rock n roll/blues mixture of riffs that will get the girl's up dancing and the guys up front headbanging! A drummer who doesn't miss a beat and bass lines DEMANDING attention well deserved! Of course we can't forget about the man behind the keys! With sick tones reminiscent of something out of the 80's it completes the project we now know as Fast Hatchet!
With a price of only $10 at the door, this show is definitely a STEAL for the amount of talent and passion behind all bands involved! This is a must-see event if you want to put faith back into a music scene crying for Rock n Roll to run SUPREME again!