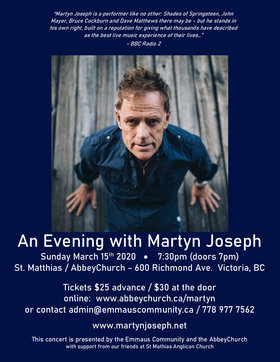 Martyn will be appearing at 600 Richmond (at Richardson). Doors open at 7pm. Cost is $25 in advance or $30 at the door. There is plenty of free parking on-site and on nearby streets.

"There is a versatility to Martyn’s music that is hard to categorise. Many have tried, resulting in labels such as Folk, Rock, Soul, Folk Funk and Americana; all of which somehow miss the mark. But sometimes music doesn’t need a defining genre and with the ability to articulate a sense of the bigger picture, Martyn’s music and social commentary manage to empower and speak for many."

“Martyn Joseph is a performer like no other: Shades of Springsteen, John Mayer, Bruce Cockburn and Dave Matthews there may be - but he stands in his own right, built on a reputation for giving what thousands have described as the best live music experience of their lives…”

At first glance Martyn Joseph is (just) another gifted singer songwriter. First impressions are there to mislead of course: Joseph's ambition is broader than entertainment, deeper than commerce. Some musicians want to move your feet, some just want to move you: Martyn Joseph wants to move heaven and earth. Somewhere back in the middle distance Mart... more info
Submit info on this show to our admins