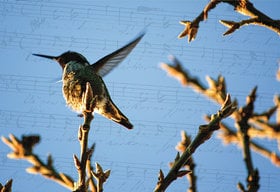 This is one of two joint performing projects presented by the UVic performance faculty each year. The works on this program celebrate “song” and were written by composers who are well known for their vocal works, or were inspired by song. “No matter the instrument or musical medium, we are all so influenced by the natural singing and drama of the voice,” describes cellist Pamela Highbaugh Aloni. “We do our best to duplicate it in all we perform.”

Soprano Anne Grimm is an internationally recognized performer known for her work in a varied and diverse repertoire. She has appeared extensively in Europe and North America with companies such as the Nationale Reisopera, Amsterdam Baroque Soloists and at the Festivals of Ambronay and Salzburg; the Bach Choir of Bethlehem, Apollo’s Fire Cleve... more info
Videos:

other sites:
At home in concert halls in Tel Aviv as well as across North America, this brilliant and versatile musician will present a variety of works for solo clarinet and for solo piano. Prepare for a lively ride from Bach to Chopin, with a dash of soulful Klezmer added for extra spice. In addition Adam Dobres (guitar), in his own right an accomplished mu... more info

Bruce Vogt is a unique and dynamic performer. He performs regularly in concert and on the CBC within Canada, and has also inspired audiences in England, the USA, Germany, France, Italy, Norway, Czechoslovakia, Bulgaria, and Japan. Bruce Vogt's repertoire is immensely varied, and encompasses music from the sixteenth century up to the present. He... more info

Since their initial season in Detroit in 1984, the Lafayette Quartet has played to critical acclaim and enthusiastic audiences throughout Europe and North America. Early in their career, they garnered major competition prizes (e.g., the Grand Prize at the Fischoff National Chamber Music Competition), and embarked on extensive study with chamber ... more info
Submit info on this show to our admins