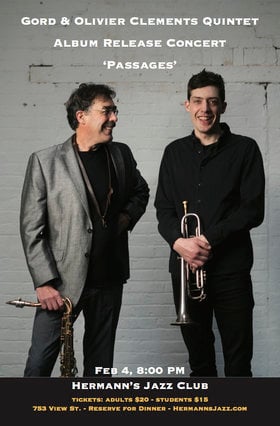 Music: Jazz / Blues
On February 4th Gord and Olivier Clements will return to Hermann’s Jazz Club to release their very first collaborative album, “Passages”. After three years of work composing and developing the music, the album was recorded live at Hermann’s Jazz Club in the spring of 2019.

“Passages” features intertwining lines and engaging melodies from Gord Clements on tenor saxophone and bass clarinet and his son Olivier on flugelhorn and trumpet. The two are backed by prominent Victoria based musicians Rob Cheramy on guitar, Dave Emery on drums, and Louis Rudner on bass.

Performing for over 30 years in Victoria, Gord Clements has established himself as one of Victoria’s most prolific multi-instrumentalists. With five jazz albums, an orchestral recording of original works for solo bass clarinet and strings, and an induction into Victoria’s Music Hall of Fame in 2009, Clements’ unique career continues to garner attention and inspire audiences of all ages.

Olivier Clements has collaborated with some of Canada’s best-known indie artists in addition to leading and composing for his own group, Dissonant Histories. Olivier has toured extensively in North America and Europe with Aidan Knight and has also appeared on stage with renowned artists like Dan Mangan, Louis-Jean Cormier, Miss Emily Brown and Walk Off the Earth. His horn can be heard on albums by Said the Whale, Northcote, Towers and Trees, and the Party on High Street.