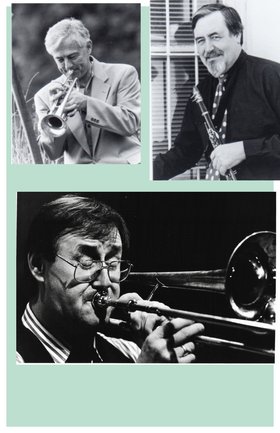 Music: Jazz / Blues
Hermann’s Jazz Club is proud to present two of Vancouver's top dixieland jazz musicians: Donnie Clark, trumpet and Jim Armstrong, trombone & vocals who will join Victoria's local traditional jazz favourites: Al Pease on reeds, Damian Graham,drums, Avram McCagherty banjo, Joey Smith, bass with Toni Blodgett on piano.
Donnie Clark's career centered in Vancouver during the days of enormous opportunity for musicians in live theatre shows, nightclubs, jazz festivals, CBC Radio and TV, plus the touring he did with such as The New Orleans Connection, Lance Harrison's Dixieland Band, jazz festival stars Chicago Six and Vancouver’s famous “Pacific Salt".
Jim Armstrong is one of the original members of the CanUS group formed in 1991 along with Joey Smith, Don Leppard and Toni Blodgett. His move from Victoria to White Rock led to changes for CanUS and having this reunion will be a very happy affair. He still is a favourite at jazz festivals around North America both with Grand Dominion Jazz Band and as a special guest artist. He is one of the traditional jazz circuit stars both on his instrument and also for his vocals in both of Canada's official languages. Along with the trio vocals that made CanUS stars at festivals recreating some Boswell Sisters, Mills Brothers and other trio vocals, it added a unique repertoire to the traditional dixieland shows.