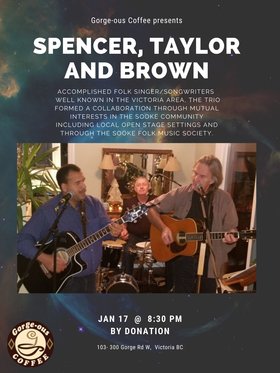 Music: Pop / Rock / Indie
Ray Spencer is an accomplished folk singer/songwriter who is well known in the Victoria area and up Island as well for his performing as a solo artist, as a member of the Clancy's Front Porch folk trio, and for his Songs and Stories shows in which he collaborates with various local Singer/Songwriters for unique , intimate concerts.
Ray has performed at Gorge-ous Coffee in the past.

Willis Taylor is an accomplished singer/songwriter and a veteran performer of many styles with a variety of musical groups in Great Britain, United States , Canada and other countries. He recently moved from Vancouver to settle in Sooke and has been rapidly growing a local fanbase, performing as a Single at various summer market venues, coffee houses (including Gorge-ous) and other shows in the Victoria area. He's also an actor who has been busy in the Victoria area, since moving from the Mainland, with dramatic roles and musicals .

We formed a (trio) collaboration through mutual interests in the Sooke community including local open stage settings and through the Sooke Folk Music Society.